Michael Fox is a founding partner of Fox Lin Inc. He is also the Author of the book Interactive Architecture by Princeton Architectural Press. Prior to starting Fox Lin, he served as an assistant to engineer and inventor Chuck Hoberman in New York, and as a design team leader for Kitamura Associates in Tokyo, Japan. In 1998, Fox founded the Kinetic Design Group at MIT as a sponsored research group to investigate interactive architecture. Fox directed the group for three years. His practice, teaching and research are centered on interactive architecture. Michael has lectured internationally on the subject matter of interactive, behavioral and kinetic architecture. He has won numerous awards in architectural ideas competitions and his masters’ thesis at MIT received the outstanding thesis award for his work on computation and design processes. Fox’s work has been featured in numerous international periodicals and books, and has been exhibited worldwide. He has taught on the subject matter of interactive, behavioral and kinetic architecture at MIT, The Hong Polytechnic University, the Art Center College of Design in Pasadena and Southern California Institute of Architecture (SCI_ARC) in Los Angeles. He is currently an Associate Professor of Architecture at Cal Poly Pomona. 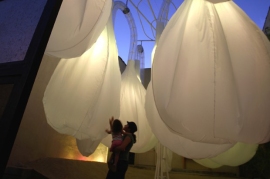